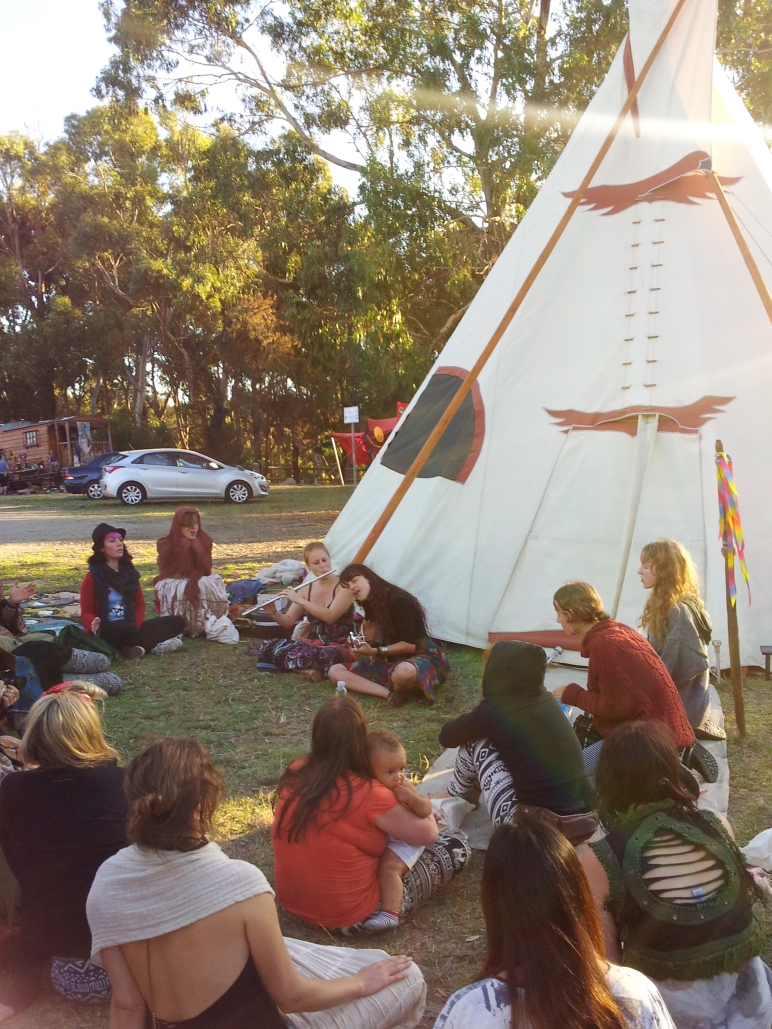 It was a bit of a mission to get to the Seven Sisters Festival in Mount Martha, Victoria from Brisbane. In one day my trip went something like this: car -> bus -> train -> plane -> bus -> train -> car. But eventually I got there! Through the festival’s carpooling page on Facebook, with the help of my friend who was going, I had a lift organised from Melbourne to the festival with 3 lovely strangers.

Meeting them set the tone of the weekend – meeting wonderful women and having new experiences. First up was eating food that had been thrown away by a couple of supermarkets. Yes, the ladies had been ‘dumpster diving’ and rather than being shocked by the fact that I was eating food that had been thrown away, I was shocked at just how much a supermarket discards in one day, and just how good the quality of their waste is. Many kilos of perfectly good food still in their packets thrown away without a second thought.

I had no real expectations of what the three-day festival would be like and I approached it with an open mind and happy to follow my instinct. On Friday I thought I would ease into things by skipping the first round of workshops and going to chill out in the Chai Tent. But as I headed back to my tent to pick up my notebook I was drawn to the sound of African drumming, and I ended up enjoying an hour and a half djembe drumming lesson instead.

I went to an interesting talk by Robin from Transition Farm about research that she was involved in looking at Incan farming practices, as well as some informal conversation about her bio-dynamic farm. I feel like what she was talking about would link really well with the work of the Youth Food Movement, and I can see that I just keep meeting like-minded people with common interests and goals and somehow it all connects.

I enjoyed the Welcome to Country and opening ceremony, great food from the Vegelicious stall and yummy drinks and sweets from the Chai Tent, excellent

conversations with my new friends and was excited to see Lisa Mitchell perform. A good night’s sleep topped off an eventful first day.

I took it easy on Saturday morning and decided to wander up to join in with some chanting. In the background I could hear the most beautiful music. I felt like it was calling me, so I left the chanting and headed to the Chai Tent (my favourite place at the festival!). I sat and listened in awe to Beth and The Brave as the duo (normally a trio, but men aren’t invited to the Seven Sisters Festival!) radiated beauty through their music, lyrics and their presence. I can’t wait until they release an album!

I went to a few interesting talks throughout the day including one on Ayurveda and women’s health, one looking at lesbianism throughout time, and one for women who want to start or improve a business. I also went to a funny and educational show in the Chai Tent called Vaudeville of the Vulva, which has left me with lyrics from one of her songs stuck in my head…”woah oh oh vagina”! I’m not even going to begin to try to explain that unique experience!!

I had noticed Essie Thomas working at the festival; she has a unique look which I found quite eye-catching. On Saturday afternoon I was chilling out in the Chai Tent with a hot chocolate and I had the privilege of hearing her sing. Not only does she have a unique look, but she also has a unique sound; a raw, sexy voice with an Aussie twang. Her last song (before we called for an encore) was an incredibly vulnerable piece about silently calling out for help. It touched me and I noticed tears in the eyes of other audience members – people who have also been there. I happily bought her CD and look forward to the next album she puts out.

The final talk I attended on Saturday was by Kemi Nekvapil who spoke about Raw Beauty. She is such a gorgeous and engaging speaker and as I sat listening, my heart felt so open and full. She spoke about our health and encouraged us to simply add more raw foods/ fruits and vegetables to our diets. She spoke about self-nourishment and living your purpose. One thing that will definitely stay with me was the comment ‘do you want your epitaph to read that you made it to a size ten?’ It was a good reminder of what is important. I would love to attend one of her retreats in the future.

Sunday morning I felt drawn to an art therapy workshop that was about ‘airing your dirty laundry’. The idea was that you choose a piece of clothing from the resources provided and alter/ decorate it to express those things inside of you that are hard to put into words. I was feeling quite positive after two days of the festival and found that I created a piece that expressed my recent challenges but in a way that was about moving forward. When I went to the clothes line to hang my piece up I saw so much pain and anger that

has obviously been repressed. People were able to be vulnerable in this process and, while it is difficult to be confronted with that pain and anger, it is important for us to see that they are common feelings and experiences that should be acknowledged rather than hidden.

Back in the Chai Tent I really enjoyed listening to indigenous singer Naniouman Coya Coya. She spoke about how having our ancestors with us gives us strength and told a beautiful story about a crow who could recognise beauty and courage in others but not in herself. It gave me food for thought.

I finished off the festival by attending a workshop called Understanding Orgasms, run by Emma Power. It was educational and I have some homework to take away from it!

I swapped details with some of my new friends and took some time to process all that I got out of the festival. It was a pretty spontaneous decision to attend the Seven Sisters Festival but I am so glad that I did and I hope to be back again next year. I left feeling very grounded and at peace with myself.